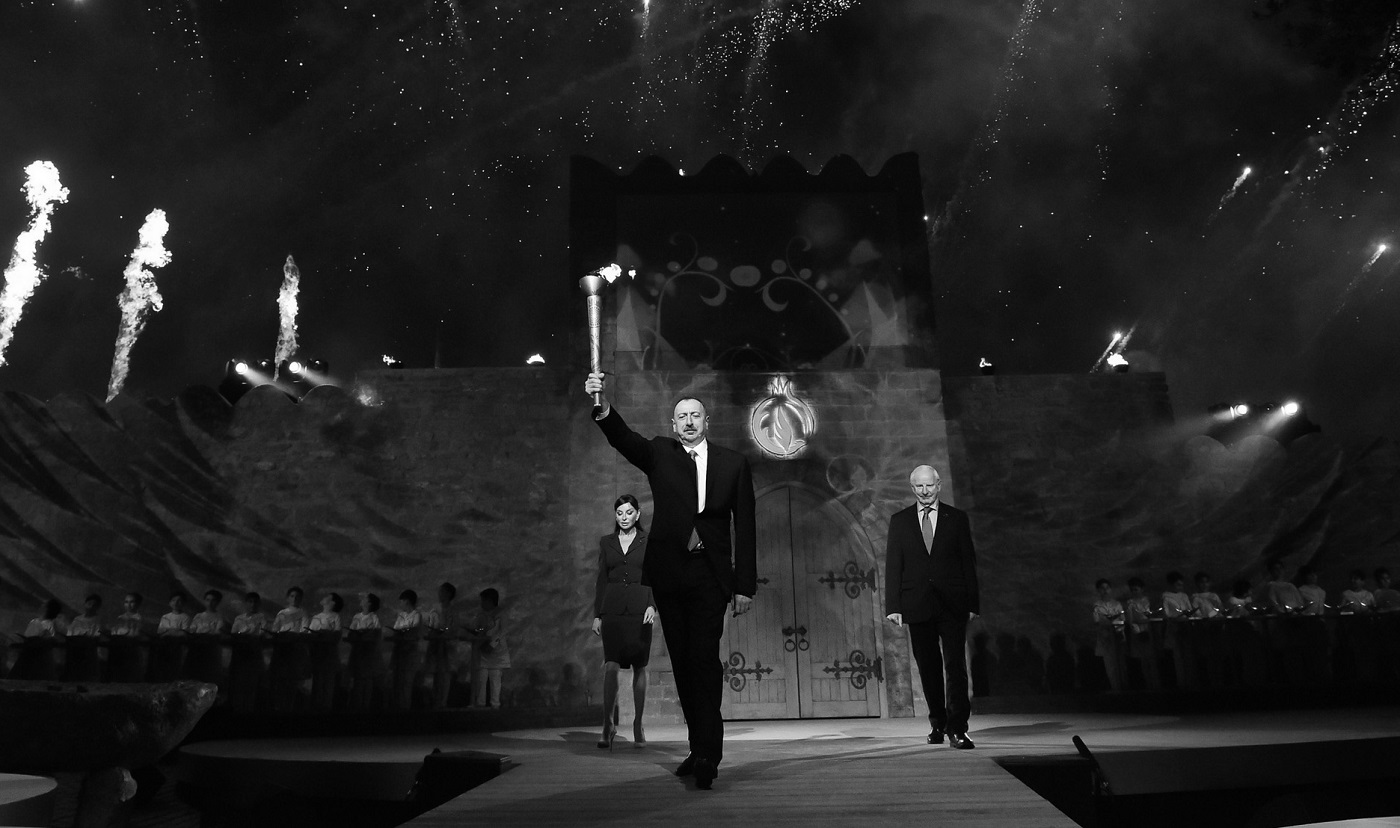 Since inheriting the presidency from his father in 2003, Ilham Aliyev has steadily shrunk the space in Azerbaijan for alternative views. Today, the country is ruled largely through fear. There are nearly one hundred political prisoners in the country. Among their number is leading journalist Khadija Ismayilova, who among other forms of harassment and abuse contended with state-sanctioned blackmail before her arrest and detention in December 2014 (which was recently extended). With many of its leading voices in prison or exile, the press is under such duress that the Committee to Protect Journalists named Azerbaijan the world’s fifth most-censored country. Meanwhile, the Aliyev family’s corruption is so extensive that one observer labeled them “the Corleones of the Caspian”— in a biting reference to The Godfather.

In an article in the July 2015 Journal of Democracy (pre-released online here), Gerald Knaus asks how it is that a leader with such a troubling human rights record continues to hold the respect of Western governments. Azerbaijan is hailed as a stalwart ally of the West. It has faced no sanctions or censure for its crackdown; in fact, it has been rewarded with the privilege of hosting the first ever European Games from June 12-28, 2015. “Other dictators,” Knaus observes, “have to lie to their people about the respect that they enjoy abroad. Ilham Aliyev can tell the truth.” This is because he has brought about the “end of shame” in Europe’s capitals.

How has the Aliyev regime achieved not just impunity, but acceptance? Knaus gives a detailed account of how Baku “[shifted] the bar on what is considered shameful in Europe today” by corrupting one of Europe’s most important human rights watchdogs, the Parliamentary Assembly of the Council of Europe (PACE). When Azerbaijan joined PACE, it was widely believed that the country’s democratic shortcomings would “best be corrected after accession, through pressure and support inside the organization.” But over time, the “idea that the Council of Europe could transform Azerbaijan [was] defeated. Instead, Azerbaijan set out to transform the Council of Europe.”

Thus far, it has succeeded. Despite blatant electoral abuse during Azerbaijan’s 2013 presidential election (results, for example, were announced in advance), Western politicians praised the ‘democratic development’ of a country which Freedom House has rated “Not Free” every year since 2004, when Aliyev came to power.

Knaus examines two common explanations for Aliyev’s success, finding both unsatisfactory. First, there is Azerbaijan’s hydrocarbon wealth—it produces nearly nine-hundred thousand barrels of oil a day. But this is barely over one percent of global oil production, and only four percent of Europe’s oil (and none of its natural gas) originates in Azerbaijan. It seems unlikely this is the crucial source of the regime’s leverage.

The second common explanation is what the European Stability Initiative (of which Knaus is president) describes as “caviar diplomacy.” As part of a well-funded lobbying campaign, Baku furnished PACE delegates with expensive vacations, “silk carpets, gold and silver items, drinks, caviar, and money” (the Washington Post recently reported on similar efforts to woo US congressmen). Upon retirement, some of these pro-Baku lawmakers have gone on to plush post-public sector careers at lobbying firms connected to Azerbaijan. Baku’s lobbyists are flanked by state-friendly GONGOs; Knaus describes how together, these groups successfully dissuaded PACE from issuing a candid report on the subject of political prisoners in Azerbaijan.

There is a compelling case that “caviar diplomacy” is the cause of shame’s demise, but Knaus discards it as well. “Many dictators hire lobbying and public-relations firms,” he writes. “No others have managed to combine arresting human-rights defenders with setting the agenda for the Council of Europe.” The real secret to Aliyev’s success, he suggests, is the “remarkable indifference of European democrats toward their own human-rights institutions.”

Knaus laments that Aliyev has “[stolen] the soul of the Council of Europe…He locked it up, along with his country’s dissidents, in an Azerbaijani prison. There it sits, waiting to be rescued.” Freeing it will require the rekindling of shame in Western capitals, where the shameless leverage their positions in the free world for profit—and for the benefit of a dictator in Baku.

Photo Credit: Press Service of the President of the Republic of Azerbaijan