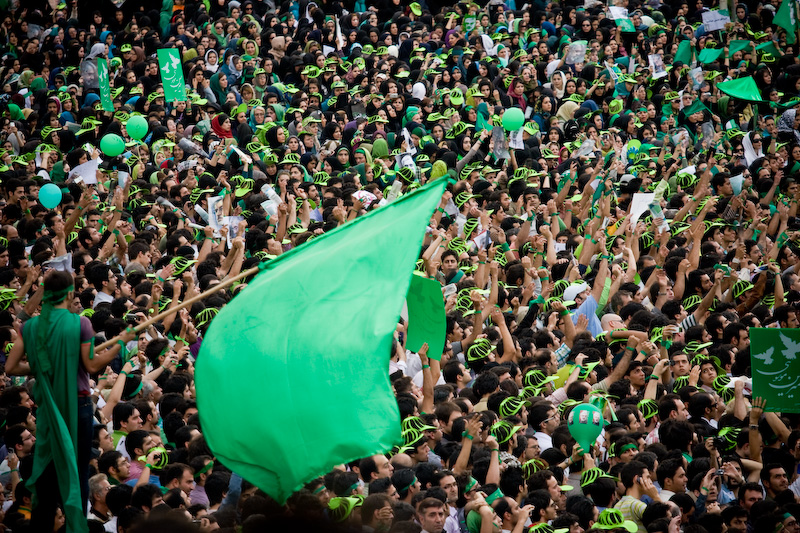 THE ISLAMIC REPUBLIC OF IRAN

Following the highly contested presidential elections of 2009, millions of Iranians took to the streets to peacefully protest the flawed election process. Police and the members of the Basij met the protestors with force, and thousands were sent to prison and subjected to mass torture and rape. The Iranian regime continues its brutal campaign to crush dissent.

The Islamic Republic’s system of authoritarian control relies on a combination of coercion, terror, and massive state subsidies that total tens of billions of dollars annually for basic staples. The regime enforces its will through powerful intelligence agencies, particularly through the Iranian Revolutionary Guard Corps (IRGC). Like the other members of the Big Five, the Iranian regime maintains a monopoly on radio and television broadcasting and through this control is able to shape dominant narratives, creating a serious obstacle to political coordination and mobilization by opposition voices.

As in Russia, Venezuela, and Saudi Arabia, hydrocarbons are a crucial regime instrument for influence and control. In Iran, the state’s oil monopoly allows it to reward its key allies. Oil revenues, along with other forms of regime patronage, have been integral for keeping in line the Iranian Revolutionary Guard Corps leadership, which represents a bulwark for regime control.

Despite the apparent problems – economic and otherwise – within Iranian society and its political system, the regime has maintained control and has become increasingly active beyond its borders. With the onset of the Arab Spring, Iran’s activity in its region has intensified.

As the Islamic Republic’s ideological underpinning decays, the regime maintains tight control over a minority base and seeks to fragment the opposition. Even as Supreme Leader Khamenei continues to retain control of the political elite through endemic corruption, signs of division between “principalists,” championing the ideals of the Islamic Revolution, and “pragmatists,” advocating reform for sake of the regime’s survival, have revealed the authorities’ tenuous position. As sanctions and corruption weaken the Iranian economy, the regime has signaled a slight shift towards reform by allowing a moderate pragmatist, Hassan Rouhani, to become president. Khamenei’s acceptance of this shift indicates a growing consciousness of his regime’s failures.

Iran’s political ideology is also losing influence beyond its borders. Although Khamenei attempted to rebrand the Arab Spring as an extension of Iran’s Islamic Revolution, the regime’s support for Assad in Syria and Iran’s brutal repression of domestic dissent have destroyed the appeal of its revolutionary ideology in the greater Islamic world.  Iran’s reputation has worsened as a result of its disregard for oppressed Muslim minorities in allied regimes, such as the Uyghurs in China and Chechens in Russia. Despite the rise of pragmatic reformers in Iran’s political system, the conservative Iranian Revolutionary Guard increasingly influences Iranian foreign policy through the use of overseas assassinations, bombings, and military assistance to Iranian-allied militias. As Iran’s ideological influence declines in the region, it has sought allies in other illiberal states sharing its “anti-hegemonic” worldview, including Russia, China, and Venezuela.

Like most authoritarian regimes, Iran seeks to control civic spaces through the forced closure of NGOs, and through the expansion of a politicized military, the IRGC and its civil militia, the Basij. Using arbitrary and brutal enforcement of laws, the regime avoids demonstrating a clear red-line for the opposition to encourage risk-averse behavior among activists. Attempting to legitimize suppression of dissidents, Iran’s Islamic Judiciary frequently convicts activists of charges such as “enmity to God” and “corruption on Earth,” often sentencing them to death. The Islamic Republic also publicly discredits convicted dissidents by broadcasting forced confessions.

With assistance from China, Iran employs a set of filters and a specialized police force (FETA) tasked with discrediting the opposition and disrupting freedom of expression. The regime uses FETA and the IRGC’s telecommunications assets to control information and the media. Despite recent promises for reform, Iranian dissidents continue to face lengthy prison sentences for their online activities.

In addition, Iran actively seeks bilateral cooperation with other authoritarian powers such as Russia, China, and Venezuela. Both Russia and China have sold Iran military equipment and offered military cooperation, while Russia has provided Iran with intelligence support and China has assisted Iran’s censorship regime. In addition to propping up regional allies in Syria, Iraq, and Lebanon, Iran has actively assisted non-state actors in Bahrain, Yemen, and elsewhere to insert itself in regional power vacuums as a counterbalance to its regional rival, Saudi Arabia.

Iran’s constitution prohibits privately-owned media, and Khamenei heavily controls the flow of information through his state media group, the Islamic Republic of Iran Broadcasting (IRIB). Vague Iranian laws such as “promoting subjects which might damage the foundation of the Islamic Republic,” “offending the Leader of the Revolution and recognized religious authorities,” and “propagating luxury and extravagance” are used to keep a lid on open expression. Violators often face months of jail time, fines, lashings, and other forms of harsh punishment.

Iran also uses IRIB to spread disinformation and project Iran’s perspective around the world. Through its English-language broadcasting wing, PressTV, Iran propagates false narratives of actual events by highlighting conspiracies, fake sources, and anti-Western rhetoric. In 2011, the United Kingdom revoked PressTV’s license for airing the forced confession of a British journalist. Iran broadcasts Spanish-language HispanTV across Latin America, and in the greater Middle East, Iran transmits Al-Alam in Farsi, Arabic, and English to promote its narrative in the region and oppose Saudi Arabia’s dominance in the pan-Arab media market. In addition, Iran finances local media outlets, such as Hezbollah’s al-Manar in Lebanon and several media groups in Afghanistan.

Iran has often been referred to as a rogue state within the international system. However, as authoritarian regimes around the world increasingly work together to create parallel institutions, the Iranian regime is finding partners with whom it can collaborate in ways that suppress democratic development. The sharing of strategies among these repressive regimes will serve to bolster the Iranian regime’s efforts to maintain power.