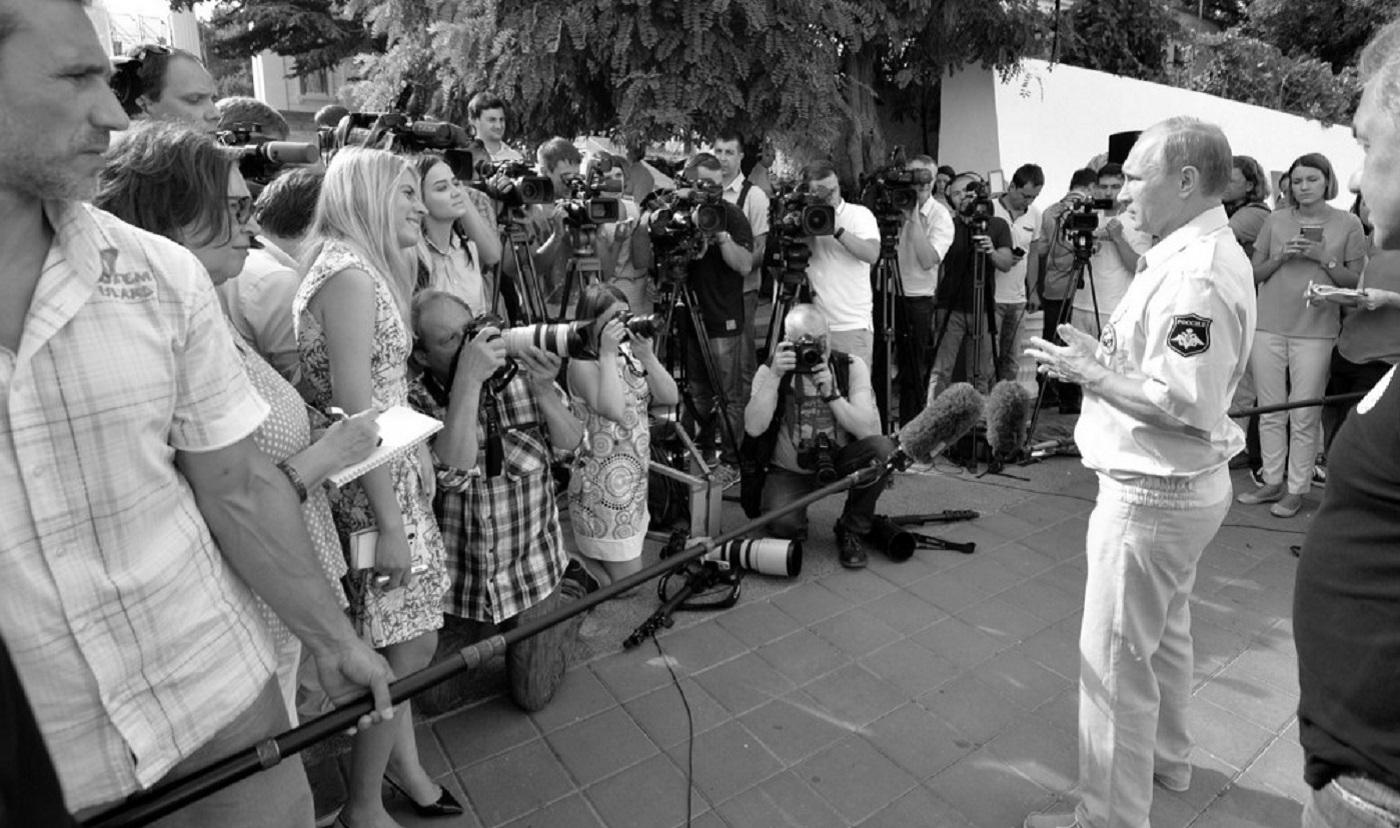 By now, many have viewed with puzzled amusement the mega-macho images trotted out by Russian media outlets of President Vladimir Putin riding a Harley, winning hockey games, and playing with tigers. Internet users reacted with humor by generating a number of popular memes, to which the Russian government reacted strongly by banning the use of celebrity images in a way that does not reflect the person’s “personality”. While the appearance of a bare-chested Putin is amusing to many (except to the Russian authorities), the broader purpose of these images—to expand a sense of Putin’s control over political processes within Russia and beyond its borders—is not. In “The Kremlin’s Information War,” an article in the October 2015 Journal of Democracy, Peter Pomerantsev details Putin’s 21st century methods of consolidating and extending his power.

One of the top methods Putin employs to control the political narrative is his extensive use of the media to manipulate reality—both in terms of “controlling the message” and creating “disinformation campaigns”—with Russia’s pervasive state news outlet RT leading the charge. RT expends enormous amounts of money and resources to produce slick programming in English, Russian, Spanish, French, German, and Arabic. It claims to reach over 600 million viewers around the world, although these claims have been widely disputed. These viewers are treated to programming that focuses on “unreported” news disseminated by leading anti-establishment figures who offer a narrative that is undeniably anti-Western and that promotes the idea that Putin himself is the guarantor of peace and stability.

The Kremlin also goes to great lengths to build coalitions of support among political actors and activists outside of Russia. As detailed by Pomerantsev, Putin’s partners span the extremes of the political spectrum to include former communist parties throughout Eastern Europe, leftist parties in Germany and other European countries, radical social conservatives, anti-EU nationalist parties, right-wing nationalists, and even the U.S.-based anti-LGBT coalition World Congress of Families. While these partners may receive direct financial contributions, Putin also frequently uses more the nuanced tactic of awarding preferential treatment to business leaders associated with these movements.

No driving ideology exists behind these coalitions. Indeed, as Ivan Krastev notes, Putin is no ideological warrior. He creates these coalitions of truly strange bedfellows for the same reason the Russian government invests so many resources into providing an alternative information narrative: to foster divisions within the West at the same time that he consolidates his own power.

As Pomerantsev observes, the underlying goal of the Kremlin’s maneuvering is to “muddle the information space” and “sow doubt and confusion” among both the Russian public and foreign audiences. At home, this ultimately produces a cynical citizenry that doesn’t trust any institution, “dashing people’s hopes for the possibility of an alternative politics while simultaneously insisting that the West is just as corrupt as Russia.” In short, fostering a hopeless, confused public which Russia’s authorities hope to prevent from rising up. Abroad, disinformation keeps foreign populations and their policymakers guessing about the Russian government’s true intentions, making it difficult to effectively respond and giving the Kremlin an upper hand in the international arena.

“Are Russians buying the Kremlin’s narrative? This might be the wrong question,” Pomerantsev cautions about the principal thought that often comes to mind when Western audiences consider the purpose of government propaganda. The emphasis on disinformation and the array of inconsistent ideologies promulgated by the Russian authorities suggest that convincing anyone of their narrative is indeed not their chief goal. Instead, Pomerantsev argues that “The Kremlin wants to show that it has total control over the script.” The effects of this display are intended to be demoralizing for Russian citizens who may want change and to foreign governments who seek to uphold international rules. Disinformation can indeed be a powerful weapon, but democrats should not yet lose hope—the construction of a pseudoreality by Russia’s authorities suggests that in reality, they have real weaknesses to hide.