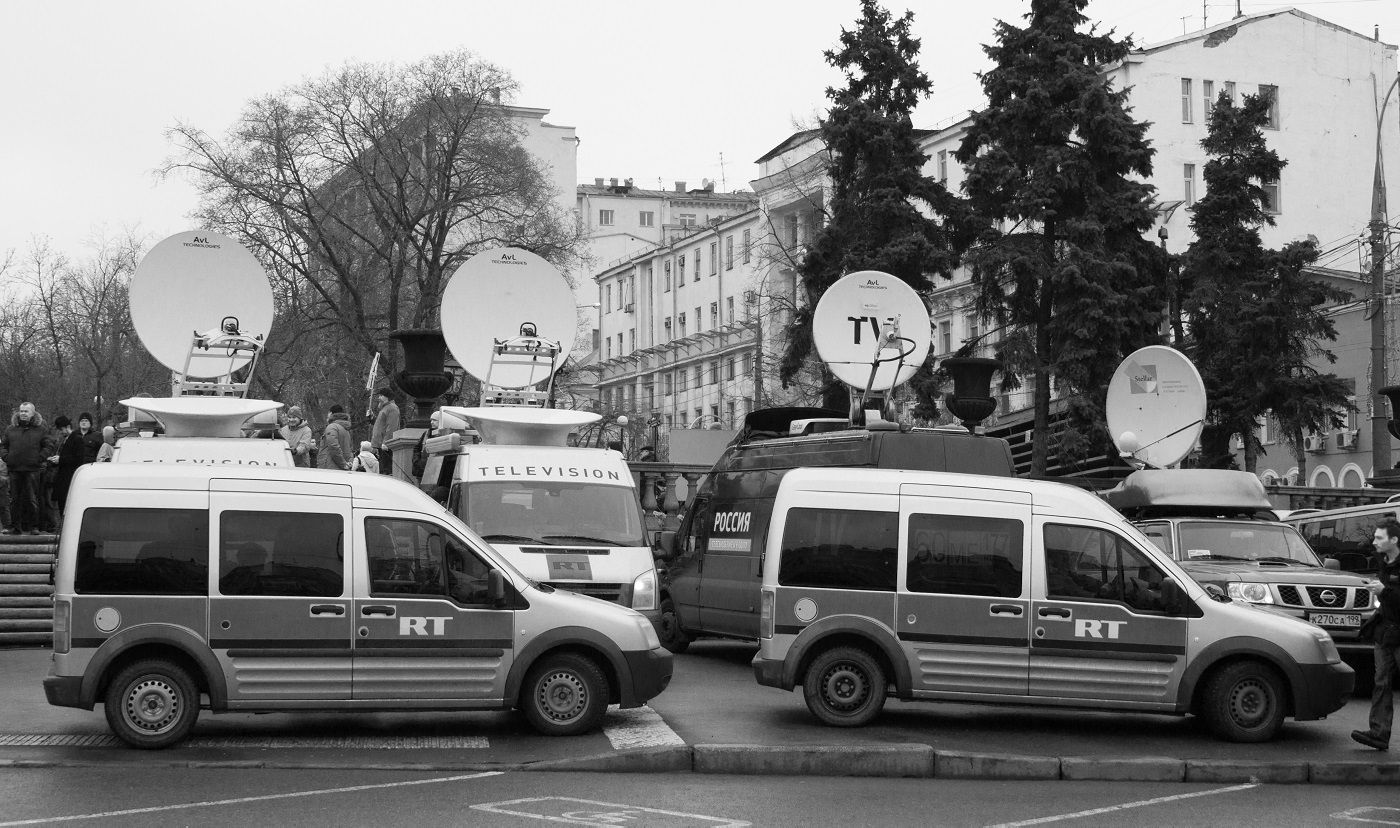 In 2015, Forbes named Russian President Vladimir Putin the most powerful man in the world for the third year in a row. This selection was made despite the fact that Putin presides over a country with a shrinking economy that is suffering from low oil-prices and Western sanctions. That an apparently weak and declining country can punch well above its weight on the international stage is a testament to the power of Russia’s propaganda machine, which has recently drawn the attention of many policy analysts.

There are a variety of theories about how Russian propaganda works. One is that it muddies the message, leading audiences to think that nothing reported by media is true. Others point to Russian propaganda’s polarizing nature that allows it to inflame divisions within democratic societies where they might not be as pronounced without such external stimulation.

While both of these assessments provide useful insight into what Russia is doing, a more nuanced analysis reveals the degree of sophistication with which the decision makers overseeing Russian propaganda target specific messages to specific audiences while obscuring the messages’ true source.

The Russian propaganda machine has numerous branches and divisions that are designed to influence different audiences. Coordinating this effort for state-funded Russian international broadcaster RT is First Deputy Presidential Administration Chief of Staff Alexei Gromov, who has been involved since RT's inception in 2005. There is input from other state agencies, such as the Ministry of Foreign Affairs. RT Editor-in-Chief Margarita Simonyan plays a leading role as well. The outlet develops material that can be distributed beyond Russia’s borders on television through various foreign cable services and on the Internet through Youtube. In this way, Russia makes use of both traditional and new media platforms. By switching its name from Russia Today to the more ambiguous RT, the network produces content that can be consumed by numerous foreign audiences without viewers necessarily realizing that the source of the information they are seeing is sponsored by the Russian state.

Russia Beyond the Headlines is another source of Russian propaganda. This unit prepares advertising supplements that are inserted into prominent newspapers around the world, such as the Washington Post (see a full list of twenty-nine supplements). In contrast to RT, which reports on events taking place all over the world, Russia Beyond the Headlines tends to present a positive image of Russia and explain the official Russian point of view. The producers argue that such a service is necessary to counter what they see as overly critical or biased analysis in the Western media that has the effect of harming Russia’s image.

For a more elite audience that is better informed about Russia, Russia Direct provides analytical reports on a variety of topics (recent topics have included “Russia’s New Strategy in the Middle East,” “An Insider’s Guide to Russian High-Tech Hubs,” and “The Best Russian Studies Programs”). The reports are slickly produced. For example, the cover of the October 2015 study of Russian policy in the Middle East produced under Russia Direct’s auspices has the shadow of a bear stretching across desert sand dunes with Star Wars–style text on top.

These publications do not feature the kind of click-bait natural disaster footage that one might see on RT. Instead, they are high-minded and intelligently produced. But that does not mean that the underlying message differs from other outlets run by the Russian state; it is simply packaged to be more persuasive to the intended audience.

Russia Direct does not hide its editorial focus on Russia; however, its advertising does not make clear that it is an organ of the state. Rather, Russia Direct presents itself as a “forum for experts and senior decision makers from both the United States and Russia to discuss and understand the issues in U.S.-Russia relations.” This quote comes from a flyer that Russia Direct distributed at the November 2015 annual meeting of the Association for Slavic, East European, and Eurasian Studies (ASEEES), where many American and international scholars devoted to studying the region gather to present and discuss academic papers. The flyer also states that “Russia Direct is an analytical publication on international relations founded in 2013 in cooperation with the Foreign Policy Group.” While factually correct, such a statement does not really provide much of an explanation of who or what is behind the publication. Nowhere is the “Foreign Policy Group” defined or explained.

It is hard to say who reads these publications and precisely what sort of impact they exert in shaping the conversation and decision-making in target countries. Nevertheless, the ability to reach numerous audiences with customized messages demonstrates the sophistication of a propaganda system designed to hide what is, at its core, an authoritarian regime that otherwise has little technological innovation to offer the rest of the world.

Robert Orttung is assistant director of the Institute for European, Russian, and Eurasian Studies and an associate research professor of international affairs at The George Washington University’s Elliott School of International Affairs.